This page is a stub. You can help us by expanding it.

Ladders are great for getting around in Uru. They're a compact, albeit slow, method of getting an avatar up or down a vertical space. Understanding how they work is useful for building them correctly.

The most important thing to know about ladders in Uru is that there is a single ladder-climbing animation. All ladders therefore have exactly the same pitch, and are always in heights which are an even multiple number of hand-over-hand loops. Whether you are climbing a metal ladder in Negilahn, stones jutting from a wall in the Restoration Guild, a rope ladder in Teledahn, or a collapsed rope bridge in the Cleft, they are all the same ladder, and the Avatar's hands land in exactly the same place on each. The key points in the ladder are the surfaces the avatar mounts and dismounts from, and the top edge of alternating left and right "rungs".

The simplest way to create a ladder or ladder-type object for your Age is using the built-in ladder guide. Place your 3D cursor near the bottom of the place where you wish to create a ladder, then while in object mode, select the Add menu (Shift-A), choose Plasma->Ladder. A ladder guide will be created with default settings at that location. 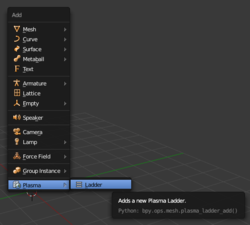 Be sure to set the options before you modify the guide in 3D view; as with all Blender "Add" tools, this commits your current options and you will not be able to modify the creation options once you've accepted it.

The provided options are as follows:

Once you have the options set to your satisfaction, move the ladder to align with existing geometry if necessary.

Always move the ladder guide as a group! It is selected when created, but if you need to re-select it, select any part and then Select Group->Grouped (Shift-G). If you separate the guide, the regions may no longer work as expected.

To complete your ladder, either line up existing meshes you've created for the rungs and ladder with their respective parts on the guide, or used the rungs, back, and floor to become the meshes themselves (just be sure not to move them independently). The guide parts have been set to display as Wireframe for the Maximum Draw type in the Object-Display panel, so if you choose to use them as meshes it may be desirable to set them back to the default Textured option. 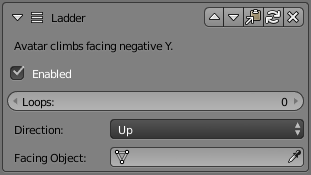 The ladder modifier gives you complete control over your climbing, which is especially useful if you want to accomplish something unusual in your Age. If you created a ladder using the provided template guide, the bottom and or top entry regions will already have a ladder modifier applied with the options pre-set to conform to what you selected when creating the ladder. You can modify the options given, but be aware that doing so may cause it to no longer work as expected.

You can also apply the Ladder Modifier to a manually-created region. The options are simple: